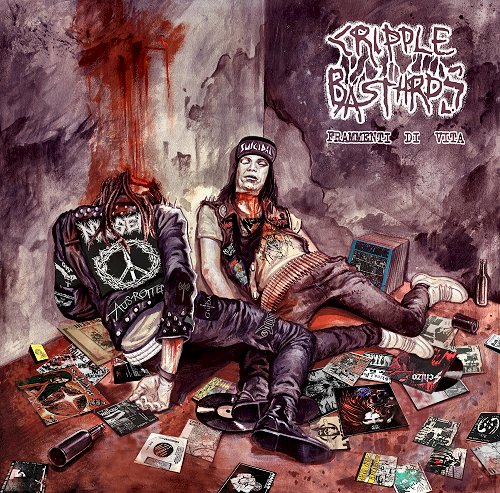 Pioneers of Italian Grindcore slashing the masses since 1988 covering 14 classics of Italian Punk, Hardcore and Thrash. The end result is a granitic overdose of hate fueled hammering Thrash/Fastcore ranging from out of control blasting fury to the real old school Hardcore roots of the Bastards... BULLDOZER, SCHIZO, NEGAZIONE, RAW POWER, JESTER BEAST, IMPACT, WRETCHED, NERORGASMO, DECLINO, UPSET NOISE and tons more! Here's their introductive quote to this album: "In 1994, the German Noise/Grind/Thrash label Ecocentric Records released a CRIPPLE BASTARDS 7" called "Frammenti di vita" featuring covers of early '80s Italian Hardcore bands butchered in our own style. For years we had been planning to record a definitive full length follow up with different songs than the previous EP, but we finally made it - only16 years later. We chose a selection of the Italian Punk/Hardcore/Thrash bands that influenced us most in the early days and helped forge our sound, and it's also our homage to those whose members have become our friends throughout the years."
The cover art of the album was drawn by Andrei Bouzikov (Municipal Waste, Voetsek, Violator, Deadfall, Cannabis Corpse etc).

The LP edition features a bonus 7" with the original "Frammenti Di Vita" released in 1994 remixed and remastered from the original 16-tracks reels.