In being a surviving unit like Cripple Bastards for some 20 odd years, it takes much persistance, perserverance and an undying spirit to wreck yourself, all out with Brutal-Fucking-Grind. Yeah, I said it. I said Brutal, so what. Brutal. That’s the supposed overused adjective that most ‘heavy’ band bios and descriptions overlook nowadays for fear of oversaturation or an unoriginal ‘old school’ repetitiveness. Thats the one word in the dictionary that C.B. should have fucking copywritten a long time ago. It fits them. It defines them. It IS them. Cripple Bastards are indelibly BRUTAL. In all ways; music, violence, artwork, attitude, politics. All born of this represenatitive and passionately destructive word. The mere fact that C.B. even exist confirms they OWN the goddamn word. C.B. are B-R-U-T-A-L. Understand it NOW.

Asti. Northern Italy. March 1988. The consolidation of the friendship and the common passion for extreme violence between drummer/vocalist Giulio the Bastard (aged 14) and guitarist Alberto the Crippler (aged 17), both coming from local thrash/punk bands that didn’t fit their tastes and didn’t match their ambitions, spawned the CRIPPLE BASTARDS.

The initial aim of the two youngsters was to keep alive the legendary Italian hardcore spirit of CCM, Negazione, Raw Power, Wretched etc. and to mix it with the fresh extremism of the fastcore / grindcore pioneers releasing records through revolutionary labels like Children of Revolution, Selfish/Japan, Earache, Peaceville and Manic Ears. This original crossover of styles, coupled with the aural viciousness inspired by early noisecore outfits like Seven Minutes Of Nausea, was topped by Giulio’s unique creative approach at lyrical writing focusing on human annihilation and existential decay. From the early 2 piece line-up (1988-1991), CRIPPLE BASTARDS gradually added new members (mainly drummers and bass-players, keeping GTB on vocals and ATC on guitar) but had to deal with constant personnel changes until core member Alberto the Crippler definitely abandoned music in 1998, the year the band found a new enduring line-up consisting in: GIULIO THE BASTARD – vocals + lyrics; SCHINTU THE WRETCHED – bass; DER KOMMISSAR – guitar; Al MAZZOTTI – drums 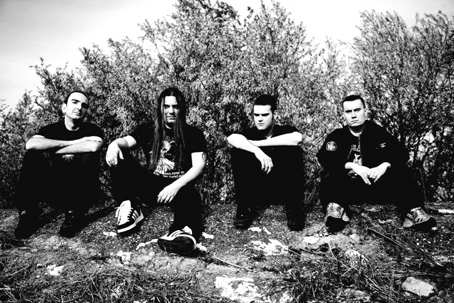 CRIPPLE BASTARDS third full length album “Desperately insensitive”, recorded at Nadir Studio by Sadist’s guitarist and Italian premier producer Tommy Talamanca, was released by Necropolis Records (U.S.A.) and marketed in Europe via Century Media Records. In the span of 3 years it has been repressed on CD by Peculio Discos (Brazil) and Obscene Productions (both in Europe and Asia) and on vinyl LP by Deep Six Records (U.S.A.) and Massacro Records (Italy): reaching the number of 10.000 pressed copies “Desperately insensitive” became CRIPPLE BASTARDS absolute best-seller and a true underground grindcore classic. 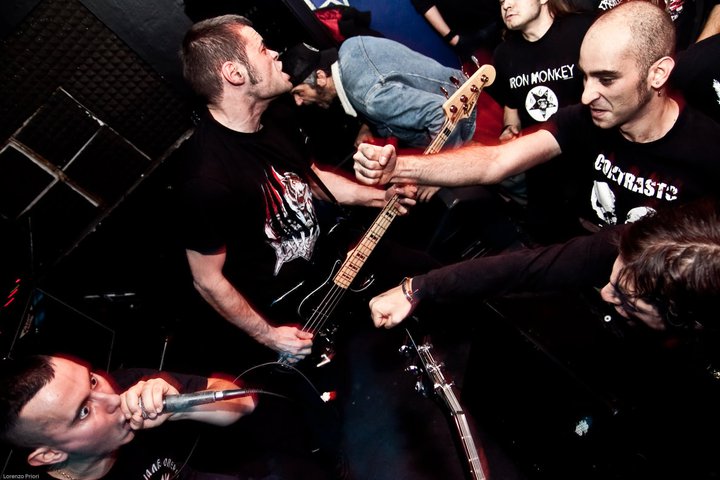 From festivals – Brutal Assault 2009 and Obscene Extreme – to frenzied,
sweat-drenched club shows with Napalm Death, Municipal Waste, Brutal Truth, Rotten Sound, Haemorrhage and more in promotion of “Variante alla morte”, CRIPPLE BASTARDS worked hard to get the album into as many ears as possible – releasing a US vinyl pressing on Deep Six, a limited edition double LP on
Power It Up and a South American CD edition on Peculio Discos.

Then followed a period of introspection. Releasing a four disc box set,
“Age of vandalism” on Selfmadegod Records in summer 2009, collecting all of CRIPPLE BASTARDS’ demos and pre-vinyl recordings from 1987 to 1993 in a staggering 1,036 songs, and “Frammenti di vita”, a covers album of all ’80s Italian thrash and hardcore classics, from Negazione and Raw Power to Bulldozer and Necrodeath, (suitably released on tour with US crossover thrash legends WEHRMACHT), on F.O.A.D. Records/T.V.O.R.

2010 marked the deal with Relapse Records, followed by a split 6″ with Spanish label mates Looking For An Answer including unreleased tracks recorded back in 2003. The first record released under Relapse Records was “Senza Impronte”, in 2012, a 7″EP with 15 new tracks showing an urging and constant sense of evolution in the band’s sound. The 2008-2012 touring schedule featured insane performances at Neurtic Deathfest, Brutal Assault, Obscene Extreme,
Maryland Death Fest and a full headlining Brazilian tour…

25 years after their conception CRIPPLE BASTARDS still hold high the banner of Italy’s most hostile and aggressive Grind/Hardcore unit around. With one foot firmly in the past, and all the vicious savagery of manic fast 80’s Hardcore extremity,
C.B. are charging forwards, with bloodshot eyes and rabid “get out and bite them” attitude, ready to introduce their brand new 2014 full length album on
Relapse Records and consolidate their ongoing mission of bringing nihilistic, grinding hatred to every corner of an underserving mankind.

2014 was a year full of news for Cripple Bastards that change their consolidated lineup having blasted the world together for 15 years. A second guitarist Wild Vitto joins the band together with brazilian-sardinian piledriving sniper RAPHAEL SAINI (STAR Jaded, Former ICED EARTH, touring drummer with MASTER, ARHYTHMIA etc, chief at Bateras Beat Drumschool) who replaces Al Mazzotti at the drums.

With this lineup CB keeps on playing around in Italy, Germany, Portugal, Holland (Nertherlands Death Fest) and Czech Republic and goes for other tours in Japan, USA and Mexico including festivals like LA’s Grindcore Fest and Housecore Horror Fest in Texas.

2018 will be another CB’s crucial year: the release a massive vinyl BOXSET collecting all the band singles, compilation tracks and unreleased material and a new lineup change, due to Wild Vitto’s quit for personal reasons, anticipate the recording of the 4th studio full-lenght album (“La Fine cresce da dentro”) that will be released on November 9th through Relapse records. 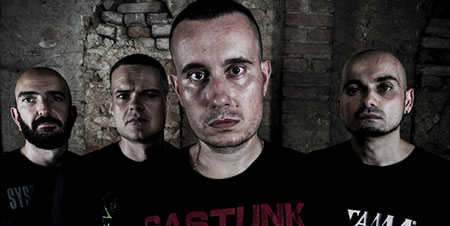