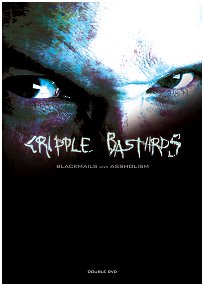 >> released in October 2007 by Obscene Prod., OBP 082, 2000 copies printed.
>> includes a 16 page photo-booklet.
>> cut, edited and directed by: Bruno Blasi
>> basic plot/structure of each chapter written by Giulio the Bastard

“Folks, this is how it’s done. Blackmails and Assholism offers not only a new curse word, but is also comprised of nearly six hours of killer entertainment. First up is a four-and-a-half hour documentary tracing the history of this Italian grind band from their beginnings in 1988 to present day; it’s complete with hundreds of photos, show flyers/posters, show/tour footage, interviews with just about everyone who has been part of Cripple Bastards (including various fill-in members) and videos of their first rehearsals in an abandoned mill in the town of Asti. The documentary is the dictionary definition of thorough, detailed and exhaustive as every nook and cranny of CB’s history is explored and uncovered from early motivations, tour experiences, philosophies, controversies (including the whole to-do over the Almost Human cover photo), how they and the music have changed over the years and the role they’ve played in calling out scene bullshit while nurturing the touring circuit via a squat/show space in the town of Dordoni. Everything is edited professionally and the quality of the bootlegs has been cleaned up remarkably. This part of the double DVD absolutely fucking rules and would be worth shelling out for in and of itself, but there’s more. Much more.
Next is 45 minutes of footage of the band’s 2002 U.S. east coast tour, including much onstage (or floor, depending on the venue) and behind the scenes tomfoolery of crusty punks losing their minds, weed huffing and political correctness gone awry at New York’s ABC No Rio, where the band not only had their show canceled, but were refused entry into the venue for the controversy involving Almost Human. It’s hilarious to watch the final footage, with “Dickheads” superimposed on the faces of ABC’s staff as they argue with the band out on Rivington St. After that, there’s 35 minutes following the band around the west coast/Mexico in 2003. Rounding out this beast is a full set from 2003’s Obscene Extreme Fest in the Czech Republic. Actually, there’s also a killer booklet included with photos and quotes from sources accusing the band of rampant “assholism,” when in reality, CB are simply a hard-working grind/metal band who provoke while remaining true to their ethics, values and love of the music.” (DECIBEL MAGAZINE)

D I S C # 1:
– 1988-1998 documentary: a 1h and 40min documentary about CB’s history in the first 10 years (1988-1988) with interviews to the former members and a lot of rare, restored VHS footage showing the Bastards at their very beginning.
– video-report of the first US tour (East Coast 2002) including the notorious ABC No Rio case and more stuff related;
– video-report of the second US tour (West Coast 2003) with PHOBIA including shows in California, Seattle, Denver, Texas and Tijuana/Mexico;
– extras/trailer;

D I S C # 2:
– 1998-2007 documentary: a 3 hour film riding thru the basic features that consolidated the band’s style and negative fame in the last decade. Interviews with the current members, a history of CB related to the many tours and festivals (5 times at Obscene Extreme, tours with Ratos de Porao etc), reports and tips on each album and a huge part explaining/showing in detail how the band’s controversy and “assholism” has born and widespread all over the years.
– Live @ Obscene Extreme 2003: 4 camera take of Cripple Bastards’ complete show at Obscene Extreme Festival 2003