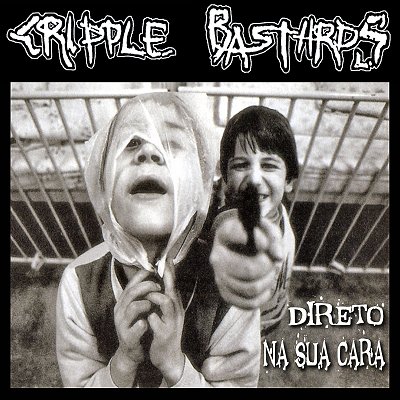 3 WAY CD – Including the almost complete CB live set from GTB’s birthday festival in Torino/El Paso. The sound quality is raw but decent for a live recording; the songs’ selection goes through the earlier hits to stuff taken from “Misantropo a senso unico” and “Desperately insensitive” (not recorded yet by the time this show happened). The outstanding features of this release are mainly the special appearance of Michele Hoffman grinding on a couple trax (6 years after his departure from CB) and the speed of the whole set, which is ways faster than the studio versions. Once more, CB are hosted at El Paso for a memorable event; the remarkable point is that this place has been in good relationships with us since ever and despite their being highly politically active it never came to an argument vs our nihilistic attitude. This CD was originally supposed to be done by CHC’s own label, but then things failed and passed to another brazilian label, Mutilation Records. Mainly a collector’s item.