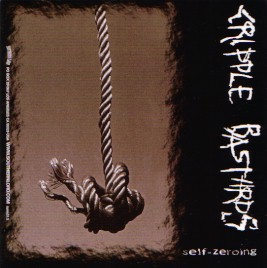 CB’s longest song ever composed, lasting around 6 minutes with its slow-paced introductive part and the ending harsh noise assault where CB and Bastard Noise melt together in a gigantic wall of sonic deflagration.
This was the band’s last session to date made at Nadir Studios with Tommy Talamanca. The EP got sold out very fast, even the latter re-issue. It shows a newer CB way to grind which is a lot more worked + solid and matches perfectly the huge dose of negativity and violence Eyehategod unleash on the flipside with their unreleased track “I am the Gestapo” ..and even being atypical to the average Southern Lord outputs it ends fitting greatly.

> Released in 2004, Sunn # 31.5, 1500 (or 2000?) copies made out of 2 different pressings, few hundreds on colored wax (transparent green and red on the 1st pressing, marble violet on the 2nd).
> Comes with a 2 sided cover jacket w/ lyrics inside, no inserts.
> Ending harsh-noise onslaught made by Eric Wood and John Wiese (BASTARD NOISE).
> Recorded, mixed and mastered in Sept. 2003 at Nadir Studios, Genova / Italy Sound engineer: Tommy Talamanca.

Years gone to satisfy whims of others we’re tired, exhausted,
channelled through anxiety’s dead-ends.
Your increasing for further
gains………………………………………………………………..
as repetitiveness tramples on our talent >> anteroom to the darkest existential nonsense.

dreams are over, collapsing into a sordid chasm
where vital souls are ageing terribly.

PROSTRATED BY SCHEMES
FANCY’S MELTED AWAY
DRAINING AN IMMENSE CRY

a mask soldered on-face, tears fermenting beneath,
this mechanical regularity I’ll never fit [in/out]
screwed by a waste-dependence role.
Your urges of expansion… always fed by a circle of fools.
Goin’ on to breathe a sense of instability /
“non-affordable” >> the norm, “resignation” >> its backbone
how can we run so beyond self-esteem
where’s the value of strain in a production-labyrinth
transfiguring every trace of individuality??
Knelt down to a dimension of easily replaceable tesserae
immured to eternity in a made-to-measure cast
born in automatic misery, social crisis the excuse
YOU HAVE NO GUTS FOR DESPISING AND CHANGING
SETTLED IN CONVENTIONALITY, A PROGRAMMED FATE BASED ON MONOTONY.
REFLECTIONS OF FAILURE, “A JOB LIKE MANY OTHERS”…..
I’LL NEVER TOLERATE TO WATCH MYSELF DYING AFTER 40 YEARS ROTTING.