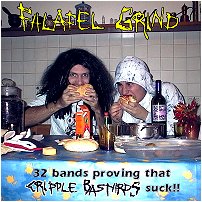 This came out from a common idea of GTB and Alberto the Crippler after receiving shitloads of diy demos including Cripple Bastards’ covers.
We started to make a selection of the best ones and after talking to Curby/Obscene, the project of a celebrative comp. found its way. This compilation has been really successful and we still agree on saying that most bands featured played the songs better than CB themselves.

The extra interactive part included stuff from our older website + 4 video shots (Obscene Extreme 1999, Padova “2 days of struggle” 1996, Udine “Treblinka” 1998 and GTB + ATC unplugged doing a joke-song called “Psichiatria”). A funny thing is the legendary bonus track (“Blood and honey”) that consists of a late ’70s Amanda Lear disco-hit with grind style grunts added by GTB. It came out well becoz the deep, masculine Amanda’s voice was kinda in tune with GTB’s growling.. Curby told that this track has been on a Czech top-ten (among bands like Korn, Strawberries etc!) for months and got an incredible popularity in his country. Today it’s still the most shared CB track on condivision programs like Kazaa, DC++ and similars. CB used it as intro during their performance at OEF 2000, getting a lot of people dancing just like in a huge disco-hall. “Falafel Grind” is quite an outstanding release pointing out a fun-side of CB which is quite distant from the feel of our records/mentality; it’s mainly the trace of our celebration to the first decade of existence and of the influence certain songs left all over the under-grind scene.