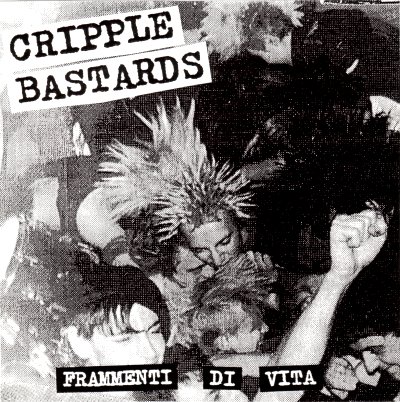 recorded in 1994 at Dracma studios, Torino

C.B. at the top of their ’80s Punk/HC mania paying homage to the roots of italian extremism. 7 classic italian HC jams revisited in a faster + ways harsher style and filtered through ATC’s wall of distortion. This record was selling over 50 copies x Saturday at the record stand in Milano’s “fiera di Senigallia” and brought us a huge response from a more Punk-oriented crowd that wasn’t familiar to CB before. The importance of this release stands in the fact that CB was one of the first bands to make an all-cover release based on their country’s Punk roots… bands like Slayer, Napalm Death, Ratos De Porao, Sepultura + many more did the same but some time later. Also, the italian ’80s Punk revival (new generations getting into Wretched, Eu’s Arse, Impact, Indigesti and so on) exploded right after this record and after E.U.’91 putting out stuff like Impact “82-85” LP, Rovina Hardcore comp… GTB assumes that a big part of that @Punk scene – today hating CB to the bone – found its starting point in something developed by CB themselves!!

> Released in 1994, E.R. # 128, 2000 copies made on 2 different pressings.
> First 1000 copies were all on black vinyl and had a pressing mistake on the last song, which starts cut the at the beginning.
> Due to the 1st press defect, the factory offered the label a cheap re-press (1000 copies) in many different colors going from light yellow to red, wine-violet, dark brown and more. There’s at least 10 different colors existing. The 2nd press had obviously the last song complete.
> In 1999-2000 Ecocentric Rec. (that stopped in the 2nd half of the ’90s) sent us 90 extra copies without cover that were left in the label’s warehouse. So we selfreleased a hand-numbered edition with completely different art (Adriano Celentano on the front) and no inserts. Most of them were on colored wax.
> both 1994 pressings had an insert (7″x7″) enclosed, feat. a CB statement