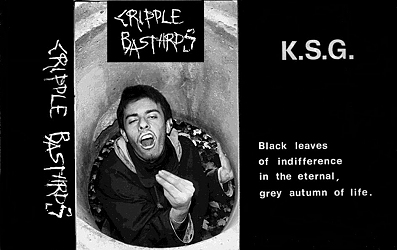 Even if CB were around since 3 years already, this was the first release they wished to publish and distribute/trade in the diy scene, all what they did before (including the first 25 song Demo recorded in 1989) was just ltd tapes with no covers spread among friends in their town.

DISSONANCE was a CB’s side project with a drummer called Luigi. So far as early CB (1988) had a lot of thrashing Punk/HC tracks and in ’90-91 chose to radically move to total Noise/Grind, DISSONANCE was meant to be a follow-up to the more HC oriented edge. It didn’t last for long due to bloody quarrels/misunderstandings between Luigi and the rest of the band. Luckily, CB never stopped playing those classic trax and brought everything back to light years later. DISSONANCE’s “Proud people” Demo on this tape remains an unforgettable trace of rabid, raw Asti Thrash-Punk in its unique sound.

Over 1000 copies of this were sold through the years.

LINE-UP on the CB recordings: