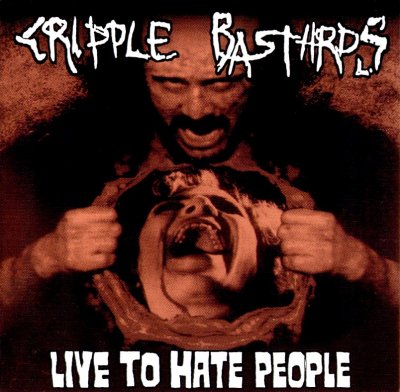 This 3″ fucker quickly became a real cult-item for many italian fans due to the idea of combining fast nihilistic music with cursing God in italian slang between the songs. This happens above all on the last show (Udine, May ’97) where CB had a psychotic guest on stage inventing some of the most blasphemous bullshits ever published on an Italian record. Of course this makes no sense for a foreign listener, but in Italy this quickly became a widespread gag and CB were expected to do it again and again at all their shows. This turned into such a ridicuolus excess (people goin’ to see CB mainly for hearing GTB cursing rather than listening to the music) that we decided to radically cut it off from a CB performance. But the “blasphemous Grind” formula influenced a good number of bands in the local scene and was kept alive by them. This Mini CD collects 4 different CB shows from ’96 to ’97. The older (Sept. ’96) had 2 guys of Arturo as temporary drummer + bassplayer and took place in Udine, opening for DOOM. The label that published this was on parole with GTB since ’95, when this was done we weren’t too satisfied of working with them and anyway, there’s a terrible gossip saying that the money they got from us for co-producing this was a lot higher than the actual expense, so they made the whole press with our cash and got for free the most of it. We never made clear if this was true or not, but a lot of things concerning this 3″ were very misterious. Anyway, the best quote to describe its content is the following – taken from the back cover:

“22 songs, no matter which ones and why just those ones, what really impresses is the way this is performed, the intent of violence and extremism hidden behind. The fastest, the filthiest. Every single second… like a personal challenge. Hands bleed, throat explodes scream after scream, but pain is worthless… hatred prevails. Crudeness, verbal violence, that minimalistic style acquired from the sickest branches of italian ’70s culture… unholy and vicious, controversial and cruel. Against you, against themselves, against EVERYTHING.
This is the Cripple Bastards in 3 inches of plastic“.