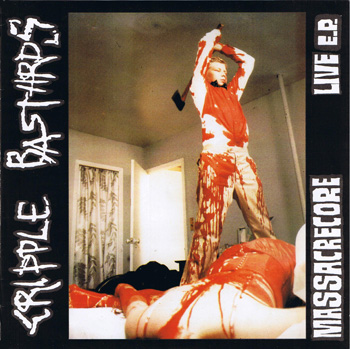 C.B. first official live vinyl. Includes stuff recorded in the short period we had Paolo from the band ARTURO on drums. Even if the quality is raw to the bone (mostly walkman recordings) this EP gives a good idea of the intensity CB had on stage in the mid ’90s, and the songs selected were anthems of those years.. out of the “Your lies in check” album and “Frammenti di vita” all-cover 7″. “Massacrecore” is a highly collectable record due to the extreme feticism the label put onto packing it with tons of flyers/stickers (some had even handwritten parts)… if you got the green wax version complete of all inserts + stuff + sticker on the plastic bag, you have one of the rarest CB items around.