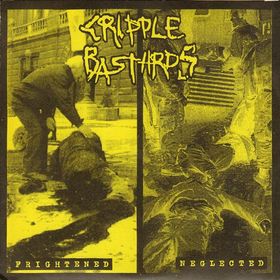 Features the very first CB attempt to record in a studio. ATC’s guitar
(goin’ direct to the mixer even there!) had the most disturbing, high-frequency distortion ever made, and was amalgamated with a clean, non-distorted bass recorded by our drummer Michele Hoffman…
Actually the vinyl pressing couldn’t keep some high frequencies that could be heard playing the master reel. Almost no band ever dared to use such a terrific guitar sound (often compared to an electric razor), but it fitted perfectly the CB’s rawpunk approach of that period, expecially on the highly successful Olho Seco and Varaus covers. This was recorded before “Frammenti di vita” but released after that and was the first & only vinyl output of ADP Rec.,
a local label run by our friend Lallo (El Paso activist at those times).
Once more, the front-cover photo portrays the atmosphere of bloodshed and despair in the ex-Yugoslavian area.

> released in 1994, no cat. # mentioned, 1000 copies. no re-presses, no ltd editions on colored wax
> 1 xeroxed insert enclosed with a couple CB statements in italian and
$.G. lyrics
> recorded in December 1993 at Dracma studios, Torino

(never edited before this website! written by GTB in 1988)

(originally written by Olho Seco, find the lyrics on their records!)

Protest’s not a mode

(originally written by Varaus, find the lyrics somewhere else!)