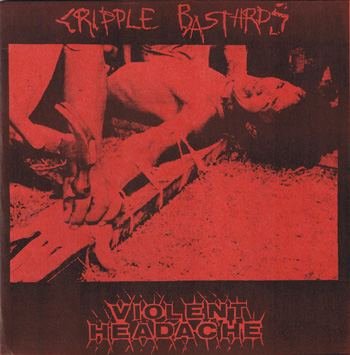 LINE-UP: (as it figures on the record insert)

THE MOST EXTREME AND ANTIMUSICAL C.B. VYNIL!

44 song ultraviolent Noisecore onslaught over any barrier of ferocity and speed.This was mainly influenced by early A.C., 7 MON and SORE THROAT. Recorded in a room of the legendary gristmill where CB were occasionally practicing (since ’88), using ATC grandma’s cassette recorder. A little secret: the insert of the record states that Michele was playing drums on those tracks, in reality it was another drummer (can’t mention the name) that made only this and then suddenly quit. The session was organized just for having a couple good songs to use on the “Son of blleeeaauuurrgh” comp. 7″ (Slap A Ham) but later – in ’92, when we got Psychomania’s offer to put a split ep out and had no money to afford any kind of studio recording, we chose to make a good editing of the trax from that session and put’em all on the record. The V.H. split remains the most extreme and antimusical CB vinyl ever.