“Live to hate people II/I” digipack CD, our first official live album that came out in April 2013 on FOAD Records is still available at our official European webstore. This is how it has been introduced by the label: imagine a live set starting with “at the end of show, I’ll get the one that threw this bottle and I’ll fuck his mother” and culminating into a riot, broken PA and desperate sound technicians and promoters threatening to call the cops. It’s not an ordinary live album, it’s the first official Cripple Bastards’ live full length, the insane follow up to “Live to hate people” 3″ MCD (1998) including – on popular demand – the highly debated Rovereto show interrupted by a furious riot and anarchists throwing bottles on stage. This has been captured by a crystal ultra-powerful soundboard recording, and besides the fun fact of all the insults and gags between the songs, you also get the best sounding CB live performance ever, strenghtened by the band vs audience hostilty of the whole set! This also includes as bonus the older “Live to hate people” vol.1 originally released 15 years ago as a 3″MCD and now completely remastered. All together 32 songs of rabid Fastcore/Grind in the total hateful spirit this band has been delivering for 25 years with no compromise and remorse!! Deluxe digipack with 12 page booklet including photos, flyers and liner notes. An ominous appetizer for those who anxiously wait for the band’s upcoming 5th studio album, to be released later this year on Relapse Records.

WAR ON EVERYTHING HATE/GRINDCORE SINCE 1988! 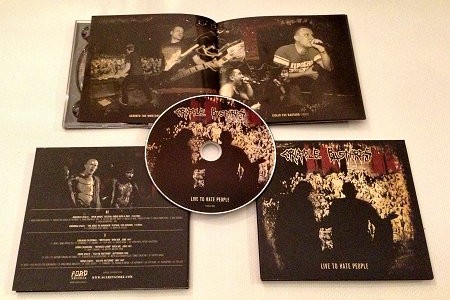